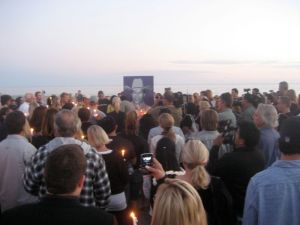 It was a warm and beautiful Southern California night at Zuma Beach. There were about 200 people gathered to pay their respect and share their experiences with Dr. Frank. Every single news station and the paparazzi were also there. There were also three police cars. Fortunately everyone was respectful.

His entire office and most of his family were in attendance. So were many of his friends and lots of his patients including Gary Busey, Lisa Rinna, Harry Hamlin, Janice Dickinson and Melissa Rivers. I helped set up the candles and passed them out. I spoke to a few of his patients. They said he was just the nicest, most down to earth doctor they’d ever met. He was a truly genuine individual who really cared about them.

His family members and others spoke at the event. They spoke of his kindness, generosity and love for others. His cousin talked about how he’d lost everything and Frank took him in even when the rest of his family wouldn’t. People involved in his foundation talked about all the wonderful thing he’s done for underprivileged children, ex-gang members and animals. His friends talked about his great sense of humor and his uncanny ability to show up for every event and party in LA.

There were tears, laughter, hugging and crying. I think the vigil really helped a lot of people come to terms with such a tragic event. He was only 50 years old, in perfect shape, didn’t drink, do drugs or smoke. He exercised, took care of himself and was never reckless. He was a great motorcycle rider and could easily navigate his Jeep all over the ranch and canyon roads. His accident occurred on Pacific Coast Highway which is six lanes wide and flat. He did not drive off a cliff as some have said. He went off the road over some rocks right next to the ocean. I personally think maybe someone else ran into him or maybe it was mechanical failure. His ’95 Jeep Wrangler did not have a roof which is how he hit his head when it flipped over on the rocks.

I knew him through his love of motorcycles and animals. He loved riding his Harley through the canyons. He also loved rescuing dogs and then other animals. He told me his dream as a child was to one day own a ranch and rescue a lot of dogs. I met him when he first bought the Bony Pony ranch. Then he started adopting rescue hounds. I’d found some chickens running in the street after Kapparot and he let me take them to his ranch. I made a chicken hutch to protect them from the other animals. They lived out their lives on his ranch.

I remember going to his ranch once when his steep driveway was just lots of sand and gravel. I rode my Ducati up and barely made it to the top. As I was leaving I kind of dumped my bike going down. I instantly got under my bike so it never hit the ground. I was so embarrassed that I picked it up with such force that I almost flipped it over on the other side. He later paved that driveway. I posted some pics earlier from that day.

On his last day on earth he finally climbed a sand dune in Malibu that he’d always wanted to climb. He even tweeted a photo of his dog Jill atop the dune. His dog Jill survived the accident and is doing fine. These were his last tweets before getting into his car and heading home yesterday. His accident occurred at 4:30, 20 minutes later. He had a wonderful last day on earth doing the things he loved with his dog.

After 25 years of driving by, I finally hiked to the top of the giant sand dune on the pch west of malibu. Much harder than it looks! Whew! 3:45 PM Aug 16th via Twitter for BlackBerry®

Those of you who were concerned about his ranch and animals need not worry. His mother lives there. They run the Foundation out of the ranch and things will continue. I did give them my contact information if they have to place any animals. I was told they will know what’s happening in a few days. All of his staff are still employed. They can be contacted if needed through the website http://www.drfrankryan.com Here is the link to his foundation so people can see all the wonderful things he’s done http://www.drfrankryan.org

TMZ took some video of the event. Video from the vigil

UPDATE: CHP has ruled that he did not die from tweeting. He died from an “unsafe turning movement.” He could have been trying to avoid an animal then over corrected his turn.

Mary Cummins is President of Animal Advocates. She is licensed with the California Department of Fish & Game, USDA and the City of Los Angeles to rescue and rehabilitate wildlife. Cummins speaks to local community groups and students about respecting wildlife and humane wildlife control. She is also a Humane Nuisance Wildlife Control Operator. She has written manuals on small mammal rehabilitation besides numerous articles. She was born and raised in Southern California. She attended Beverly Hills Good Shepherd Catholic School and Beverly Hills High School. Besides being a member of Junior Mensa and on the Dean's list, she was a top ten national swimmer and competed on the men's water polo team. She began college at the age of 15 attending the University of Southern California on scholarship, majoring in Psychology/Sociology. After college Cummins became a licensed real estate agent specializing in income property in Los Angeles. She obtained her real estate appraisal license, real estate brokerage license and currently does real estate consulting, expert witness testimony and review appraisals at Cummins Real Estate Services.
View all posts by Mary Cummins Animal Advocates Real Estate Appraiser →
This entry was posted in animal, animal advocates, beverly hills, doctor, dog, dr, frank ryan, lover, mary cummins, plastic surgeon, rescuer. Bookmark the permalink.