Posted on February 11, 2011 by Mary Cummins Animal Advocates Real Estate Appraiser
It was a cold morning in Austin Texas on February 9. There were even icicles on Jesse’s truck.

Jesse found a cold little waxwing bird outside his shop door on the ground. He picked him up and brought him inside to warm him up.

After a few hours getting warm the bird was much better. Here he is perching in his shop. 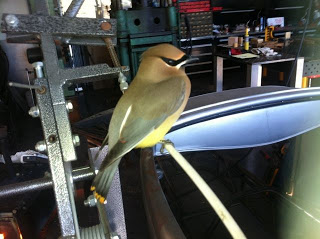 When the bird was all better Jesse took him outside and released him back to nature. Thanks for saving him, Jesse! Below is a video of his release.

Jesse James operates West Coast Choppers and Austin Speed Shop. You can follow him on Twitter or his blog. I asked him for permission to post his story, pics, video here.

Mary Cummins of Animal Advocates is a wildlife rehabilitator licensed by the California Department of Fish and Game. Mary Cummins is also a licensed real estate appraiser in Los Angeles, California.

Mary Cummins is President of Animal Advocates. She is licensed with the California Department of Fish & Game, USDA and the City of Los Angeles to rescue and rehabilitate wildlife. Cummins speaks to local community groups and students about respecting wildlife and humane wildlife control. She is also a Humane Nuisance Wildlife Control Operator. She has written manuals on small mammal rehabilitation besides numerous articles. She was born and raised in Southern California. She attended Beverly Hills Good Shepherd Catholic School and Beverly Hills High School. Besides being a member of Junior Mensa and on the Dean's list, she was a top ten national swimmer and competed on the men's water polo team. She began college at the age of 15 attending the University of Southern California on scholarship, majoring in Psychology/Sociology. After college Cummins became a licensed real estate agent specializing in income property in Los Angeles. She obtained her real estate appraisal license, real estate brokerage license and currently does real estate consulting, expert witness testimony and review appraisals at Cummins Real Estate Services.
View all posts by Mary Cummins Animal Advocates Real Estate Appraiser →
This entry was posted in animal advocates, austin speed shop, car, custom, customizer, jesse james, mary cummins, motorcycle, texas, west coast choppers. Bookmark the permalink.